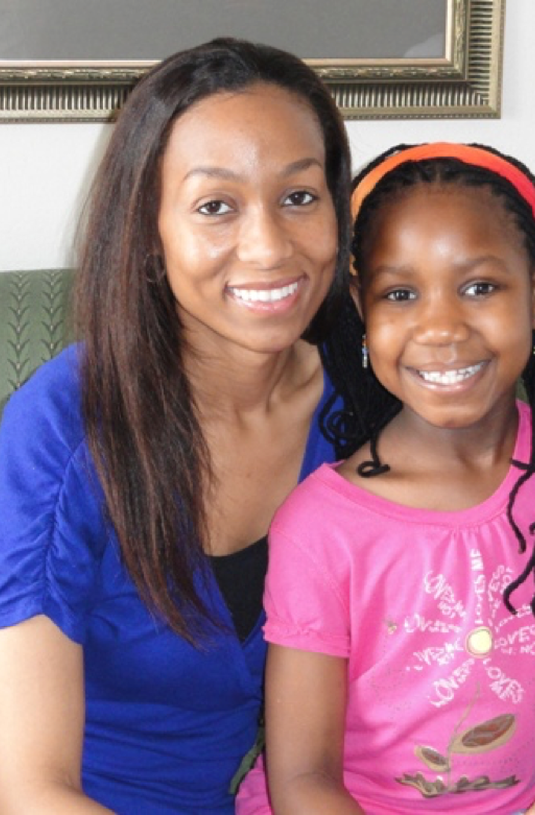 Recently, I had the pleasure of interviewing Tanya Orr, a wonderful wife and mother of two, about her fervent desire to adopt, the long journey taken towards that end, and the wonderful gift she finally received in the form of her eight year old adoptive daugher, Sanayah.

It was apparent to Tanya early on that she had a calling on her life. Her desire to serve, especially to children in need, led her to begin mentoring young girls through the "Big Buddy" program in Baton Rouge, Louisianna. As a mentor, she was matched with a ten year old mentee named Courtney. The connection was immediate. The closeness and strong bond with Courtney affected Tanya tremendously. It was this relationship that served as a catalyst, igniting a spark in her which over time grew into a flame of desire for adoption.

During the time she was mentoring Courtney, Tanya also met her future husband Christopher. A teacher himself, he embraced and lauded her efforts in working to make a positive impact on Courtney's life. Together they mentored, growing both fond of Courtney and of each other.

Tanya and Christopher were married in 2005 and eventually moved to Red Oak, Texas in 2006. Courtney of course, having a family of her own, stayed in Louisiana. Still, she remained close,with periodic visits during the summer months and the holidays. But time and distance -two unrelenting accomplices in eroding relationships -made it increasingly difficult to maintain what they once enjoyed. Ultimately, the relationship with Courtney started to drift.

Of course in any journey there are detours, dilemmas and dead ends; however, remember the spark...well it had slowly, methodically grown into a flame and began to consume Tanya. Soon, the newlywed couple was searching for adoption and agencies and browsing online profiles of foster children in need of a home. This initial step led them to the Gladney Center for Adoption agency. Here they learned more about "The Process," signed up for classes, and made formal preparations to adopt.

After putting together a "forever family" portfolio, home misits from Gladney, and narrowing the match profile, they were off...to wait, and wait, and wait. It seemed that finding a girl between the ages of 5-7 who matched their profile, turned out to be more harrowing than previously imagined. Thus, they waited.

Close to three years past. During this time they conceived a beautiful son, Elijah. A joy and a blessing, but the flame within Tanya continued to burn. As year three of the search was coming to a close, Tanya received an email regarding a six year old girl named Sanayah. While ecstatic about the possibility, an air of hesitancy set in once the child's records were reviewed. This proved to be a defining point for Christopher and Tanya as they were struck with an epiphany - "There is no such thing as a 'perfect child'; what we need to do is just say YES."

That utterance has made all of the difference in the lives of Christopher, Tanya and Elijah. Sanayah came to them during the fall of 2009 and has since settled in wonderfully. The transition has not been without difficulty, however. But that is the GIFT. The ups and downs, the "let's try this again", the God please grant me_______, the did we make the right decision, etc. According to Tanya, these are the things that make life worth living.

Tanya closed the interview by saying, "We thought we were going to help her, but the reality is that she has helped us. Loving an adopted child is like seeing through the eyes of God; it is loving unconditionally with God's love. It is natural to love your biological child; this is easy. Your biological child takes on some of your traits; they look and act like you in similar ways. Adopted children are not anything like you. You rely on God to give you this love for them. It has helped me understand God's love for us."

It is clear that Tanya and Christopher, and little brother Elijah couldn't be happier with the addition to the family. In fact, these two parents plan to adopt again. Oh, and in case you were wondering about Courtney, she graduated from high school in the spring. Tanya and Chris are very much looking forward to a reunion.

We want to make it easy for you to share your stories with us and with other families who are going through this process. If you recently adopted from the New Beginnings Program and would like to share your photos and stories, here are some story starters ›

Rights & Release: By submitting this material you grant the Gladney Center the right to use, publish and otherwise publicly display this material in the manner The Gladney Center chooses, including use in brochures and on the web.
Please email your story and photos to us at adoption@gladney.org. We look forward to hearing from you!

Stay Connected with Us

Success! Thanks for signing up!